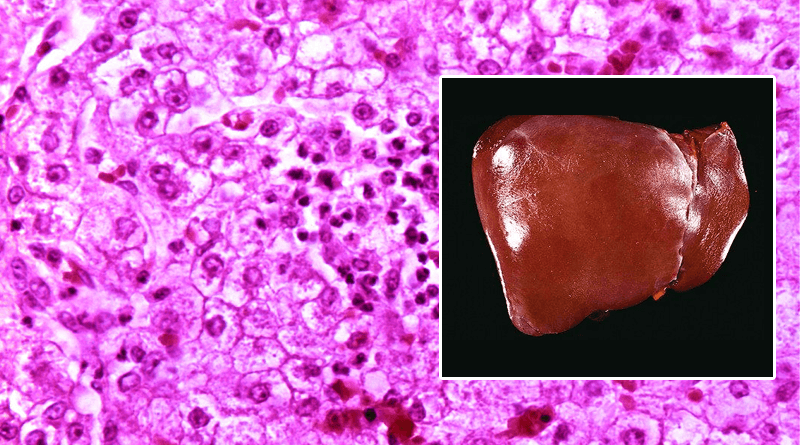 The liver is an organ of glandular epithelium located in the abdominal cavity in the right upper quadrant and flow to the diaphragm. It is a large viscera, red-brown, about 1.5Kg weight in an adult is intraperitoneal and is covered by a thin layer of connective tissue, the capsule of Glisson, becoming thicker at the level of the hilum, allowing the supply of the liver. For the hilum enter the portal vein and the hepatic artery and out the right and left hepatic ducts and lymph vessels.

The liver is divided into two lobes by inserting the falciform ligament. The right lobe is larger than the left. On the right lobe two regions recognized the caudate lobe and caudate lobe or Spiegel. The underside of the liver presents the impressions left by the bodies with which it is in contact (part of the digestive tract and the right kidney.

The hepatic artery branches repeatedly and forms the interlobular arterioles, which may or irrigation structures holder or subdivided into smaller caliber arterioras that drain the liver sinusoids. The portal vein is divided into smaller veins, venules or interlobular portals that reach the portal space. In turn, the portal venules branch to lead to distribution venules extending from the periphery of the lobe.

The two circulations, portal and hepatic blood poured transported to a common system of vascular channels, liver sinusodies, which are wider than the capillaries. Between the walls of the sinusoids and hepatocytes that surround extends Disse space in which we find numerous microvilli and reticulin fibers.

The sinusodies converge radially towards the center of the lobe to form the central vein or v. centrilobular progresses along the lobe and leaves sublobular joining the vein. The veins sublobulares fuse into 2 or more hepatic veins that will lead to the inferior vena cava.

Liver parenchyma comprises epithelial cells derived from endoderm, called hepatocytes, which are grouped into partitions interconnected. It is polyhedral cells. In the microscopic observation of a section of liver hepatocyte cell appears as a cubic appearance with granular cytoplasm and esoinófilo pale, due to the presence of glycogen. They have abundant mitochondria and endoplasmic reticulum rough and smooth indicating a synthetic function. The large core is centered. Generally, hepatocytes have a single core that can vary in size from one cell to another, but sometimes two or more cores, issue related to the mechanisms of cell renewal and regeneration can be observed.

The surface of every hepatocyte is in contact with the wall of the capillary sinusoid through the space of Disse and in hepatocytes other surface. Two adjacent hepatocytes define a tubular space known as bile canaliculi that form the first portion of the bile duct system. Bile canaliculi, that carry bile, form networks along the hepatic lobe and end in the portal space.

Hepatocytes show different metabolic profiles according to their distance to the portal. Nearby hepatocytes portal space are more exposed to oxygenated blood and contain enzymes involved in oxidative reactions. They produce and store glycogen and produce and secrete proteins. The most distal portal spaces hepatocytes have low oxidative capacity and contain many esterases for participating in conjugation reactions and detoxification. Hepatocytes present between the two ends show intermediate metabolic properties.

The stroma consists of connective tissue proviniente mesoderm. The cells found in the connective tissue are fibroblasts, macrophages, mast cells, plasma cells, fat cells and leukocytes. Hepatic stromal cells are fibroblasts responsible for synthesizing fibers and ground to give substance bra cells, endothelial cells and Kupffer cells which then will be described in the following section to better functional understanding.

There are different types of capillaries:

Hepatic sinusoids are surrounded on all sides by hepatocytes so that permeate the entire liver. The sinusoidal capillaries or sinusoids are coated with two types of cells, endothelial cells and other larger disposed between anteiores and facocítica activity, Kupffer cells. The basic function of these monocyte derived macrophages and Kupffer cells known as is metabolize senescent erythrocytes and secreting proteins related to immune processes and destroy bacteria. Kupffer cells reach 15% of the cell population of the liver.

The space between reverstimiento sinusoidal cells and hepatocytes, as already discussed above, is called space of Disse, it transfers most of substances between hepatocytes and sinusoids occur. Containing blood plasma is directed toward the periphery of the lobule where it passes the lymph capillaries portal space. Also in this perisinusoidal space abound type III collagen fibers constituting the frame reticulínico liver.In perisinusoidal breaks are also other cell types such as c. starry, c. Ito (cells containing lipid inclusions rich in vitamin A), lipocytes etc.

The term lobule structural unit refers to the liver, and a lobule consists:

Hepatocyte interconnected sheets extending from the terminal hepatic venule center to the periphery of the lobule.

Peripheral portal tracts, each of which contains terminal branches of the hepatic artery and portal vein and bile duct lel.

Acino The term also refers to the structural unit of the liver but acino be defined by the volume of liver that is irrigated from a single terminal branch of the hepatic arterai contained within a space holder. According to this structural unit it is the central peripheral vein while the center is the portal space.

Portal spaces or spaces are Kiernan tissue regions from Glisson’s capsule triangular appearance that are in the periphery of liver lobules and containing blood vessels (a branch of the hepatic artery and portal vein branch ), lymphatic vessels, bile ducts and nerves. Human liver has three to six portal tracts by each lobe.

Liver regeneration occurs in response to tissue damage.In contrast to other tissues capable of regeneration, eg. skin, liver regeneration is not dependent on a group of germ cells (stem cells) but is caused by the proliferation of all remaining mature cells: hepatocytes (the main functional cells), epithelial cells bile (which line the canaliculi) , fenestrated endothelial cells (which line the sinusoids and allow direct exchange between blood and liver cells), Kupffer cells (macrophages in the sinusoids) and Ito cells (cells that store vitamin A, synthesized different connective tissue proteins and secrete various growth factors). All proliferate to restore the lost tissue but the speed of their response is different. Hepatocytes are the first to proliferate around the periportal space first and then extending into the central veins. The other cells proliferate after hepatocytes which suggest that it is they who produce the stimulus for such proliferation.