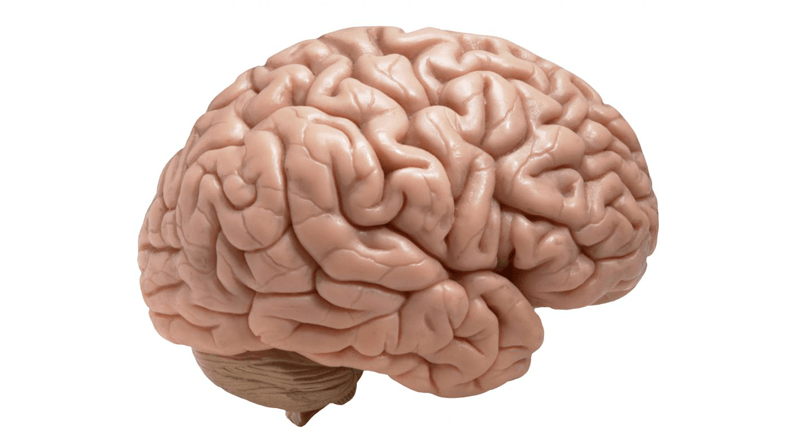 The human brain is the most complex of all living structures; it processes sensory information while coordinating and maintains vital body functions. Up to a billion nerve cells (neurons) are working together through electrical impulses to coordinate physical activities and mental processes that distinguish the human being from other species.

It is a gelatinous mass that weighs about 1.4 kg, depending on body weight and sex of each person (however, no connection between brains weight of an individual and his intelligence).

Together with the spinal cord, the human brain is the central nervous system (CNS).

Skull and 3 membranes called meninges with CSF, allow the brain to stay protected from blows to its 4 lobes:

Frontal Lobe: located behind the forehead, is responsible for much of the complex thought (imagination, planning and behavior).

Temporal lobe: located behind each temple; home to the auditory cortex and is responsible for language comprehension also involved in memory and emotions.

Occipital lobe: it is in the back of the head; controls the visual cortex that processes what we see.

Cortex: Fabric layer that forms the outer covering of the brain, whose thickness ranges from 2 to 6 mm. In larger mammals like humans, this bark shines with bumps and ridges that provide additional space to store all important information about the body.

The two hemispheres (left and right) are connected by the corpus callosum located within the cerebral cortex.

Cerebellum: Structure the size of a walnut at the base of the skull, under the occipital lobe. Coordinates functions like balance, movement, coordination and language acquisition.

Thalamus: Receives information from the body and the various sensory organs, which filters before sending it to bark to avoid brain overload. Conversely, the cortex sends information to the thalamus for transmission to other areas of the brain and spinal cord. It is also known as “gate of the cerebral cortex.”

Hypothalamus gland which controls vital body functions such as sleep cycle, thirst, and body temperature and pain sensations. Along with the pituitary gland, it is a link between the hormonal and nervous systems.

Hippocampus: Area located inside the temporal lobe is important for memory and learning.

Brainstem is located at the base of the human brain and connects to the spinal cord. It consists of 3 areas: mesenscéfalo, Pons and medulla, which allow the brain to communicate with the rest of the central and peripheral nervous system.

Spinal cord: The central nervous system begins in the lower area of ​​the brain and extends along the spine.Connects the brain to the nerves that reach the rest of the body. Their nervous tissues are approximately 45 cm long and just under 2 cm thick, forming the peripheral nervous system.