10 Tips Causes and Treatment against Snoring 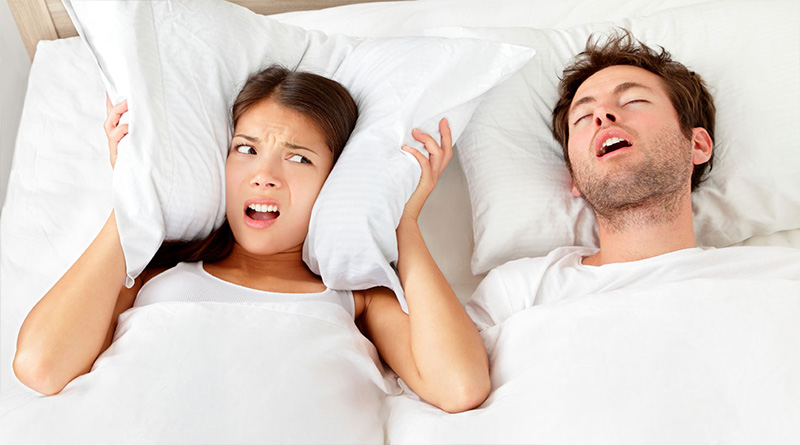 Among the natural remedies to prevent snoring, plus infusions, we can find a balm based olive oil and rough that favors the decongestion.

Snoring is a problem that affects the sufferer, as the person who may be at or near the same bed, because usually the annoying sound disrupts sleep. The sound of snoring occurs when there is a small obstruction that hinders the free passage of air through the back of the mouth and nose. It can also be a symptom of the disorder called sleep apnea, in which the person can stop breathing partially or completely for about 10 seconds while sleeping.

Although snoring is not considered as a health problem, the fact is that it can disrupt sleep and be a sign that something is wrong in our body. For this reason it is recommended to consult a doctor if they suffer from frequent chronic snoring. For all other cases, there are different natural ways to combat and improve sleep quality.

What are the causes of snoring?

Snoring can be the result of excessive consumption of alcohol; overweight and obesity; colds or respiratory allergies include nasal congestion; late pregnancy; deformations in the nose or deviated septum; bad nutrition; among others.

How to treat snoring?

There are several natural remedies and tricks that help us fight the annoying snoring. Pay close attention and put them into practice.

Excessive alcohol and tranquilizers, makes our depressed central nervous system and muscles of the diaphragm and jaw relax, which increases the risk that the person snores.

If you suffer from overweight or obese, you’d better start looking for a healthy diet, exercise and other weight loss methods. This factor is one of the most influential in the production of snoring as it makes breathing difficult and pressing the airways.

Sleeping on your side

Several studies have found that people who sleep on their back tend to snore more. For this reason it is recommended sleeping on your side. To get used to this position, a good trick is to place some rolled stockings or tennis balls on the bed, so that in lying back feel discomfort and get back to side.

Put one or two higher pillows, allows better air flow through the nose and mouth, which reduces the risk of snoring.

An old trick that has worked for many is from an onion in half and sprinkles on it a lot of salt. Once ready you put on a plate near the head of the bed and leave it until the next day.

Saline solutions allow us to unclog nasal congestion, which prevents open, our mouths and generate snoring. For this simply mix half a teaspoon of salt and a pinch of baking soda in a cup of water at room temperature. When ready, a small trickle applied in the nostrils.

The infusion of nettle is another good remedy to prevent snoring. Just to mix a tablespoon of dried nettle leaves in a cup of boiling water, let stand 10 minutes covered and drink before going to sleep.

Sage is ideal for combating various respiratory conditions, so that in turn is good for combating snoring. To take advantage simply must prepare an infusion of sage, mixing various plant leaves in a cup of boiling water. Let stand 10 minutes, strain and drink before going to sleep.

This remedy is to mix a glass of olive oil and 50 grams of rue in an airtight container. The mixture is left to macerate for two weeks and after that, strain and applied to the nostrils and neck. The remaining mixture was stored in a dark container.