Anatomy of the Human Rib Cage 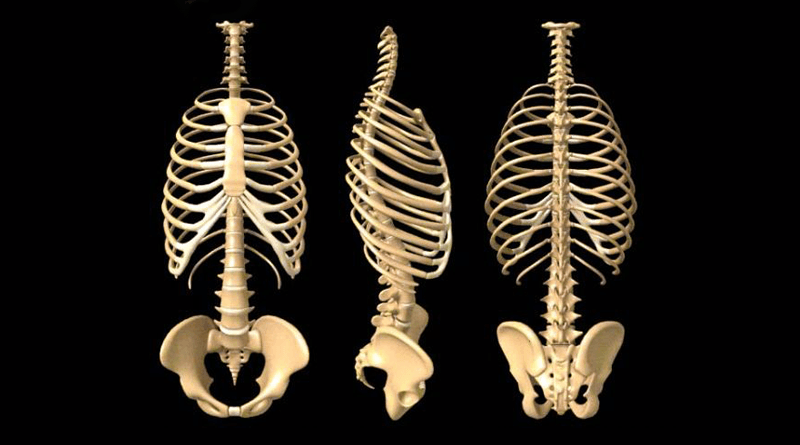 The thorax, known colloquially as breast, has inside a bone structure that forms and supports it, this structure is known as rib cage or chest bone.

The main elements of the rib cage are:

The rib cage has a shape that resembles a cone briefly grows inferiorly as wide and form a hedge whose main functions are:

Let’s use some characteristics of the main components of the rib cage.

Lies in the anterior mid line of the chest with a shape that vaguely resembles a dagger.It is a flat bone about 15 cm long and has been the result of the fusion of three bones:

The sternum has three points of anatomical interest:

1.-The jugular notch: also known as sternal notch is a central slit in the top of the handle. It is easily palpated and is generally aligned with the inter vertebral disk between the second and third thoracic vertebrae and the point where the left common carotid artery leaving the aorta.

Forming the sides of the rib cage are 12 pairs, all anchored to bodies and the transverse processes of the thoracic vertebrae, and are bent downwardly toward the front body surface. The first 7 pairs are anchored directly above the sternum through independent costal cartilages (hyaline cartilage rods giving a secure but flexible link) and therefore are called true ribs (Figure 1). The remaining 5 pairs (8-12) are not anchored directly to the sternum, or do so indirectly (8-10) or have no connection to the sternum (11 and 12) and thus are called together ribs false. Among the false ribs, the last 2 pairs (11 and 12) do not have any previous attachment to the sternum and this makes floating ribs. Note that pairs of 8 to 10 are integral with the sternum through the costal cartilage junction with the next higher rib. In the floating ribs their costal cartilages lie embedded in the muscles of the body side walls.

It is a bent flat bone and its main portion is called the body, the upper edge of the body is smooth, but its lower edge is sharp and thin and has on its inner face a rib groove, which is the cause through which flow nerves and intercostals vessels. The forward end of the body is anchored to the rib cartilage securing it to the sternum.

In the general structure of the rib can differentiate certain significant parts are: