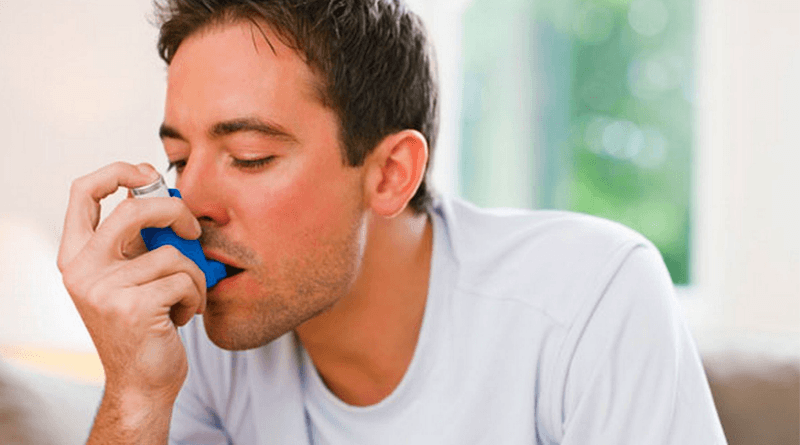 Asthma called a series of disorders characterized by obstruction of the airways, mainly the bronchi. The word asthma comes from Greek and means ‘acute episode of shortness of breathe’. Bronchial obstruction is characterized in that it is reversible, totally or partially, when we apply a bronchodilator or, occasionally, spontaneously without treatment. Obstruction is due to two factors: a contraction of the muscles surrounding the bronchi and inflammation of the bronchial wall that causes its light to narrow. Inflammation of the bronchial tubes containing mucus, fluid and cells. It manifests itself in patients as a sensation of breathlessness, cough and noise as you breathe air that resemble whistling (wheezing calls), but not always all symptoms are present in asthma episodes.

Another feature of asthma patients is that their bronchi are more sensitive to certain stimuli and respond with bronchospasm, while people without asthma tolerate smoothly.

From the viewpoint of the mechanisms that occur in the lung, asthma comprising a number of diseases that follow a behavior-dependent random (stochastic). These results in the stimulation of pulmonary one component can affect many and nonlinearly, which can lead to substantial fluctuations in the physiological changes and clinical expression. This explains why one known trigger of asthma in a patient may lead to a different clinical expression, from a light to fatal bronchospasm asthma (non-linear effect).

There are different classifications of asthma:

As for its origin it can be divided into intrinsic and extrinsic asthma or allergic asthma. The origins of intrinsic asthma are unknown and are detected more frequently in adulthood. It has a worse prognosis than allergic in nature and tends to become chronic. Extrinsic asthma, in turn, consists of an antigen-antibody reaction that triggers the process. It mainly affects children and young adults, is characterized by brief attacks and reversible bronchospasm with wheezing and difficulty breathing, and controlled with proper treatment.

Allergy is a disorder of the body’s defense mechanism consisting of an overreaction, through a special antibody (immunoglobulin E) against substances which, in principle, are not harmful (pollens, mites, epithelia, food or medicine). When these antibodies, which are fixed in certain cells, bind to allergens, the release of certain substances which, directly or through other cells, cause inflammation of the organ where they settle (bronchi, nose, eyes or skin occurs). There is an inherited predisposition to developing allergies, but exposure to allergens is necessary to develop the disease.

Asthma may also be classified as mild, moderate or severe, depending on the frequency and intensity of symptoms, the way it affects the daily activities and the degree of bronchial obstruction. Mild asthma can be controlled with medication and usually does not affect the daily lives of the sick; moderate asthma treatments require more severe and interferes with daily activities of patients; and severe asthma requires continuous monitoring and may endanger the lives of people who suffer.

First you have to make a clinical diagnosis based on clinical history where you show the symptoms described above. We also have to investigate the characteristics of the crisis, presentation, interval between attacks, seasonal period, disease progression and a general pediatric anamnesis in order to be able to make a differential diagnosis of other respiratory diseases that may present with the same symptoms as asthma. In order to objectify the airflow obstruction, functional diagnostics, which is a lung function test (spirometry) done. It has the disadvantage that it requires the cooperation of the child and therefore performed in children over 6 years.

In every child in which a suspected asthma must perform baseline spirometry and bronchodilator (giving the child to inhale a drug) in order to show that the blockage of the airway is reversible (characteristic of asthma). Finally, an etiologic diagnosis, aimed at seeking the cause that triggers the symptoms; identifying the cause is the most important step to control the disease.

In recent years it has been shown that treatment of inflammation is the most important part of asthma treatment. So far too much emphasis on bronchodilation, but if the inflammation is untreated, the effects of bronchodilators are ephemeral. There are several drugs that have anti-inflammatory effect in bronchial mucosa, but the most powerful and effective are corticosteroids (cortisone) inhaled. Inhaled steroid doses used are very low and produce a topical effect without the side effects of oral, intravenous or intramuscular. Inhaled steroids have become the most important in the treatment of asthma medicine. Start prescribed in patients with persistent asthma, i.e., those in which symptoms occur several days a week and those in which nighttime symptoms occur. For those symptoms occur sporadically, e.g. once or twice every 15 days, it is not necessary to start with corticosteroids and bronchodilators may suffice.

Inhaled steroids do not act immediately, even before they take effect after a few days of treatment, refers bronchospasm. But for the immediate treatment of the same bronchodilators which are usually administered by inhalation they are used. There are two basic types according to the duration of action: long-acting bronchodilators are taken morning and evening every day, is whether or not symptoms, while the short-acting are usually reserved to take if necessary (shortness of breath, coughing, etc). The primary objective is that patients resort to short-acting bronchodilators on rare occasions. If not, it is necessary to enhance the anti-inflammatory treatment. Obviously, patients with severe asthma, despite receiving maximum anti-inflammatory treatment often require bronchodilators.

In patients where an allergic component is shown, antihistamine can be beneficial. On the other hand, with certain allergies there are effective immunological treatments (vaccines) that can help significantly in the control of asthma. However, as effective in treating allergies is to avoid or reduce as far as possible exposure to allergens. For example, in the case of allergy to dust mites, hygienic measures of simple house can significantly reduce the presence thereof.

Gastro esophageal reflux and chronic sinusitis can aggravate or cause asthma, so it is important to discard in asthma who does not respond to usual treatment.