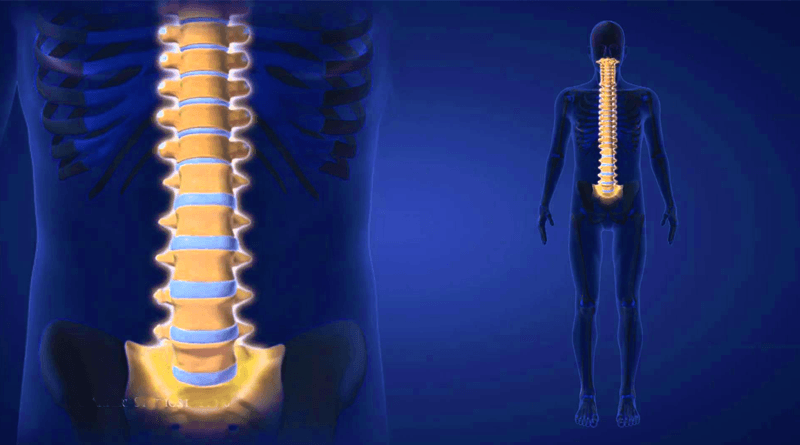 The spinal cord is a long white cord located in the vertebral canal, transfers nerve impulse to 31 pairs of spinal nerves, communicating the brain with the body, with two basic functions: afferent, in which they are carried sensory sensations trunk, neck and four members to the brain, and the efferent, wherein the brain orders effector organs perform a certain action, taking these impulses to the trunk, neck and limbs. Its functions also find immediate control and vegetative movements like reflex, the sympathetic and parasympathetic nervous system.

It is considered that the spinal cord is the largest nerve tissue of the human body; the axons of the neurons can reach up to a meter long. Weighing about 30 grams, at full development the spinal cord reaches the length of 45 cm in men and 43 cm in Women1 within the intervertebral bone called the spinal canal from the foramen magnum, in the middle of the atlas to arquial the first or second lumbar vertebra. Indeed, in the newborn spinal reaches L3, two vertebrae below and embryonic is to the base of the coccyx.

It is cylindrical in the upper cervical and lumbar segments, while ovoid greater in the front chest and upper cervical segments transverse diameter. The bone is asymmetric in nearly 80% of human beings, being the largest in 75% of asymmetries right. This asymmetry is due to the presence of more descending corticospinal fibers bundle on the larger side.

The spinal cord has two faces and two edges: a front face, two side edges and a rear face. The anterior midline presents the above medium groove and laterally limited by the above side grooves, which are apparent origins of efferent or motor nerve roots of the spinal nerves and also separates the side faces. The rear face has a rear half groove is extended by a septum to the central gray matter and limited to the sides by the rear side grooves corresponding to the apparent sources or afferent sensory nerve roots of the spinal nerves; between the two there is a groove called paramedian spinal superficially divided into two parts corresponding to the beams Goll and Burdach.

It presents two enlargements, one cervical and lumbosacral other:‘C3’ a ‘T3’ cervical intumescences: this thickening is due to the roots of nerves to transmit sensitivity and motor action to and from the upper limbs (arm, forearm and hand).

‘T10’ to ‘L2’ lumbosacral intumescences: is because the roots of nerves that transmit sensitivity and allow motor action to and from the lower limb (thigh, leg and foot).

In its lower portion thins and then end quickly pointed cone known as terminal cone. On the sides has the means of attachment to the jagged ligaments and at the bottom is continuous with the terminal phylum which extends to the bottom of the Dural sac at the level of the second sacral vertebra; and also it relates to the coccygeal filament is inserted into the coccyx bone.

Three membranes concentrically surround the spinal cord: the pia mater, arachnoid and durra mater. The pie mater is the surrounding and is introduced directly into the grooves. On it and a loose-related part of the arachnoid found a space filled with cerebrospinal fluid called subarachnoid space above this space more homogeneous and distinguishable part of the arachnoid is. It’s like a thin, transparent and loose network that does not get to enter in the grooves of the core. In some parts difficult to differentiate the pia arachnoid. Therefore, we sometimes use the term Pia-arachnoid. Finally, we have the dura mater is the outermost, fibrous and strong meningeal layer. Between the arachnoid and the dura mater is a virtual space called the subdural space?

The spinal cord is attached to the brain stem at the top with its continuity with the bulb in its middle by means of conjunctive extensions to adhere to the dura, fins on the nerve roots as dependencies of the pia mater, forming both types of extensions jagged ligaments. At the lower end by an extension of the durra that surrounds the Fillum Terminal, setting up the base of the coccyx.

In cross-section, the core is formed along its length and its divisions a gray area, the gray matter in the form of “H” or butterfly in the center and a peripheral white matter, as opposed to the brain.

Their halves are split into three and so are divided sagittal for two processes: in the dorsal posterior median septum are long and narrow, and the ventral anterior median fissure, which is broader and shorter. Longitudinally divided into 31 segments, one for each pair of ribs; Thus, the spinal nerves are deployed in eight cervical, twelve thoracic, five lumbar, five sacral and one coccygeal. Each segment has two pairs of roots (dorsal and ventral) located symmetrically in the dorsal and ventral part.

The gray matter consists mainly of nerve cell bodies and supporting cells (glia). Two anterior gray horns and two gray antlers later joined by the gray commissar. This gray commissure is divided into a rear and a front by a small central hole called ependymal or medullary canal ependyma, this being a vestige of primitive neural tube. A thoracic and lumbar level gray side poles also appear wedge-shaped corresponding to the cell bodies of neurons that form the thoracolumbar sympathetic or autonomous system. His consistency is rather uniform, although the substance surrounding the central canal of spinal cord is more transparent and soft, so it has been given the name Central gelatinous substance.

The white matter of the spinal is the surrounding gray matter and consists mainly of fascicles or bundles of fibers, becoming axons that carry information. It is divided into three basic regions are front, side and rear, on the image 4,5 and 6, respectively.

The site of dorsal root entry is marked by the dorsolateral groove; also, the ventral root entry is marked by the ventrolateral groove. These references divide the white matter in the dorsal funiculus, one between the rows, and one called the ventral lateral funiculus, while further divided into the upper cervical and thoracic segments, the dorsal funiculus is divided by the intermediate dorsal groove in Fascicle cuneiform, the side and the fasciculus gracilis.

In the spinal cord we can find certain types of cells that serve as support as ependymal cells, elongated cells that have two extensions, which emit into the previous groove or medioposterior where the ependymal previous cone and back are. We also found the neuralgia cells, ependymal identical provenance, only without their original extensions. They are found scattered in the gray matter and white.

Asta intermediolateral: One is in the upper thoracic and lumbar segments (L1, L2 and sometimes L3) of the bone. It contains preganglionic sympathetic neurons.

Ventral horn: o anterior horn consists of axons of motor neurons multipolar. Comprising the anterior outer core preferably supplies the anterior members and inner core intended for the trunk and back muscles of the neck.

The white matter of the spinal cord is composed of a large number of nerve fibers, blood vessels and glia. In cross-section available around the gray matter is observed. Its color is due to the presence of a large proportion of myelinated fibers running longitudinally, although there is also some amount of unmyelinated fibers. The nerve fibers of the white matter are responsible for attaching the core segments together and spinal cord to the brain.

Posterior cord: Son ascending sensory tracts whose cell bodies are found in the dorsal root ganglia and participates in two modes of conscious proprioception: the kinesthetic (pressure and vibration) and discriminative touch or touch epicritic (differentiation of colon, pattern recognition). It consists of two beams or bundles (where even both), the beam medially Goll and immediately Burdach lateral beam. Have small motor fibers, which are responsible for reflex arcs: between bundles Goll, is the septomarginal bundle and between Goll and Burdach, Fascicle lunette.

Edge cord: Contains ascending and descending pathways. Upstream are responsible for carrying stimuli of pain, temperature and touch or protopathic touch thick and consists of several installments: the spinocerebellar, the spin thalamic, the espinoreticular and espinotectal. Instead descending fibers are motor, are responsible for controlling voluntary movements and are the following installments: corticospinal, rubrospinal and reticulospinal.

Previous Bead: Contains ascending and descending pathways. Upstream are three issues, each responsible for different information: espinotectal handles the reflex movements of eyes and head when he gets visual information, the espinoolivar sends information to the cerebellum of skin feel and thick ventral spinothalamic leads touch and pressure. Are responsible for motor control and movement are the following installments: reticulospinal medial, and anterior corticospinal vestibulospinal.

The degree of commitment depends on the extent of the damage: it may be a complete injury or incomplete injury (if all signs indicated symptoms-observed) if only presents some or all of the symptoms but partially (e.g., paralysis partial and not total).

Level of injury: In clinic is very important to know the affected spinal level. To understand the relationship between affected spinal segment and level of paralysis produced remember the bone, unlike nerve cells, they have further growth to the development of what is nerve or spinal tube, more important than any bibliographic reference that supports this sketch is the clinical reference.

Pathology: Bone damages will compress distinct roots of the spinal cord. A good postural hygiene is necessary to prevent long-term complications; yet many of these changes have a genetic basis or are caused by accidents prevention difficult. You can turn to a specialist spinal cord.

Treatment: vértebromedular injury, when complete, requires surgical spinal fixation by specialized surgical training; if the injury affects only the bone, surgery may be successful; a damaged nerve, or damaged in the intervention, it will be very important to the assessment of lack of self care and the development of a comprehensive plan of care usually designed for nurses and will cover other disciplines, both health and social.

In the body, the central nervous system is represented only by the brain. The spinal cord is an extension of the brain is responsible for carrying nerve impulses.