Reasons of Nose Bleeding and Remedies 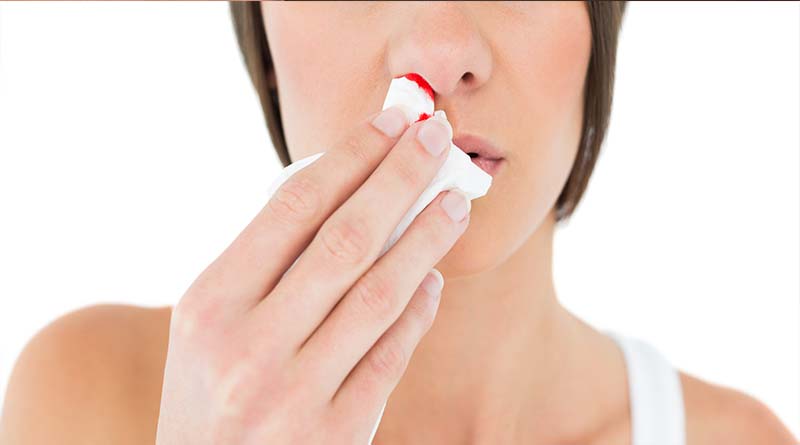 When the bleeding arises from the anterior part of the nasal septum, it is usually mild and of low severity. When we feel the nose bleed we must cover our noses, pressing with our fingers, and tilt our head forward.

Epistaxis or spontaneous bleeding through the nostrils may be due to several reasons. It may be related to rhinitis or nasal dryness, but it can also be a clue about other health problems such as high blood pressure, so if we suffer from it frequently, we should consult our GP.

Why do nose bleed?

Some people usually do, and the general explanation is that the bleeding comes from the blood vessels that supply the inside of the nose, the mucosa. The most common is that blood only one of the two nostrils, but also can bleed both at the same time.

When the bleeding arises from the anterior part of the nasal septum, it is usually mild and of low severity. It is usually caused by having touched the area in excess, by environmental dryness or by an allergic rhinitis.

In some cases it can also be due to uncontrolled hypertension. Our body works intelligently, and demonstrates it by causing a slight bleeding to naturally reduce the too high blood pressure we are suffering.

However, we review below some causes that may help us control some health problems and others that we should know to treat more serious pathologies as soon as possible.

Although it will always be the GP or the otorhinolaryngologist specialist who should make the diagnosis based on the tests, we must know what other diseases can be symptomatic epistaxis to give it enough importance if we suffer recurring.

Bleeding from the nose is also a symptom of the following most serious conditions:

What do we do before the hemorrhage?

At the same time that we feel the nosebleed we must cover our noses, pressing with our fingers, and tilt our head forward. It is important that we do not throw our heads back as we have been told many times, or that we lie down, since both positions can cause us to swallow the blood and also prevent us from knowing if we have stopped bleeding.

We will wait a few minutes and, in case the bleeding does not stop, we will go to an emergency medical center.

If the bleeding has stopped, in the following hours we will avoid making efforts and taking medicines with anticoagulant or antiplatelet effects such as aspirin. We will also be careful not to sound strong.

When deciding whether to go to a doctor, we will also consider other possible symptoms.

A less known cause of habitual bleeding, when there is no related pathology, may be the lack of vitamin C in our body. This vitamin helps to strengthen the nasal capillaries.

We can get vitamin C through the following foods:

Citrus fruits, specifically the lemon with its peeling (provided it is ecological).

We can also take vitamin C as a supplement. In case of taking too much, we would eliminate it through the urine, reason why there is no risk of taking it in excess.

Salts are a natural remedy that gives us minerals in homeopathic doses, so it has no contraindications or side effects.

There are twelve salts, which correspond to minerals that are found in our body naturally and that we ingest with food daily. They not only provide the body with the minerals it needs, but distribute them correctly so they are in the right place at the right time. When taken individually each has a specific function, and for epistaxis the following are recommended:

We will put two tablets under the tongue three times a day, separated from the meals, drinks and strong or mentholated flavors (chewing gum, toothpaste, etc.). The first in the morning, the second in the afternoon and the third in the evening. We will keep this treatment for at least a month.