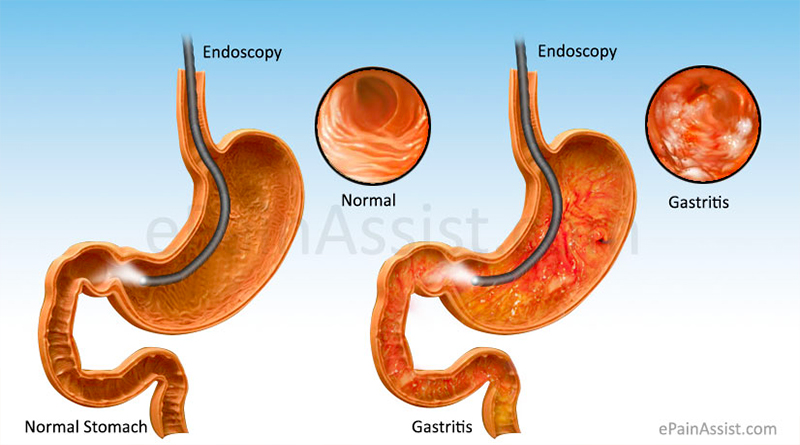 If present symptoms for more than a week we go to the specialist to make us appropriate to diagnose or rule out a possible erosive gastritis and get treatment tests.
Many people suffer digestive problems often as gas, bloating, heartburn, reflux or indigestion.
However, if these symptoms continuously suffer we should see a doctor to rule out a digestive disease, as could be erosive gastritis.
In this article we explain what this disorder, its symptoms and causes are and how to diagnose and the most appropriate treatment for each case.
What is erosive gastritis?
Erosive gastritis is a digestive disorder that affects the lining of the stomach, which suffers from inflammation and subsequent erosion or wear.
This coating plays a fundamental role of stomach protection against the high acidity of gastric juices. When the coating is damaged, symptoms start to appear.
Symptoms:
Here are the most common symptoms in people suffering from erosive gastritis:
• Abdominal distension
• Belching and flatulence
• Indigestion
• Acidity
• Changes in stool
• Weight loss
• Loss of appetite
• Less common symptoms are:
• Stomach bleeding that is evident in the vomit or stool.
• Pain when eating or drinking
Causes
To determine the possible causes of erosive gastritis must differentiate acute from chronic.
Acute erosive gastritis:
• Infection, for example, E. coli
• Steroid abuse in a short time
• Stress and anxiety
• Chronic erosive gastritis:
• Frequent and untreated colic
• Food intolerances undiagnosed, for example, lactose or gluten.
• Persistent gastric hyperacidity
• Continued stress
• Autoimmune diseases Alcoholism
Diagnosis
If we suffer the symptoms we have cited for more than a week, or have vomiting with traces of blood, we see a specialist as soon as possible. The doctor will consider the symptoms as well as our history, and we will also perform a physical exam.
If there is likely to develop erosive gastritis or other digestive disorder, your doctor may request a blood test or stool, which would help us to confirm or rule out infection.
You can also order an upper endoscopy or radiography of the stomach.
Treatment
If the doctor confirms the erosive gastritis, the severity of the condition will determine the type of medication. The softer option is antacid medications, while the strongest are acid blockers.
There is also the possibility that we prescribe a proton pump inhibitor, a drug that reduces gastric acid.
If the gastritis is caused by a bacterial infection, treatment is based on antibiotics.
In some cases of severe erosive gastritis surgery may be necessary.
Treatment should always be accompanied by a dietary guidelines, for example, opt for several meals a day and small quantities, and choose soft and easily digestible food, avoiding spices and stimulants such as coffee, alcohol or tobacco.
The doctor also often prohibits the consumption of drugs like aspirin and similar anti-inflammatory.
Erosive Gastritis antral
This type of erosive gastritis, which is rare, is characterized in that directly affects the area of the antrum, which is the lower stomach, near the start and near the beginning of the intestines.
The causes and symptoms are the same as for the rest of erosive gastritis, so will the medical examination that can confirm whether this affects the stomach area.
A food alkalizing
One way to prevent and relieve the symptoms of erosive gastritis is to try to consume alkalizing foods because they are fighting excessive acidity that characterizes this disorder.
We recommend adding to our food the following:
• Green leafy vegetables
• Vegetable juices
• Sprouts and seeds
Non-citrus fruits, except lemon, having a neutralizing function in the stomach
We can also take several days an old alkalizing based raw potato juice and extra virgin olive oil remedy. We prepare every morning and drink it on an empty stomach before breakfast for a while.
It is enough of a potato juice and a tablespoon of olive oil.
Finally, TCM recommends consumption of kudzu, a starch digestive function regulating soft but effective in these cases.