The Incredible Human Hands and Feet 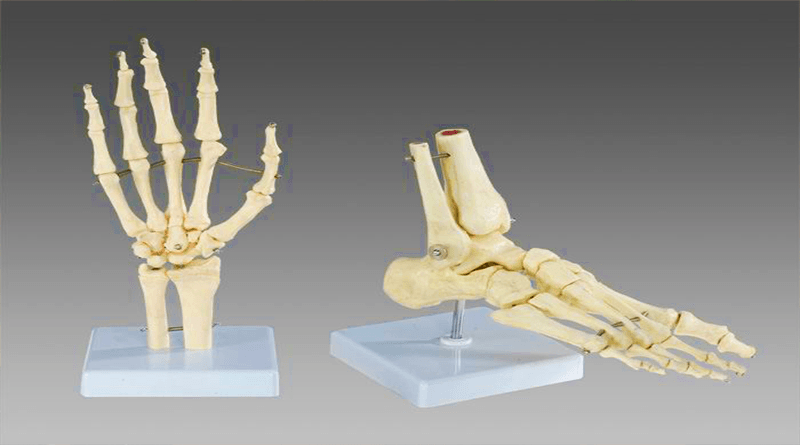 Both the hand and the foot of man represent a triumph of engineering complex, exquisitely evolved to perform a series of tasks.

Our arms and legs are pentadactilas tips: Have five fingers.

When the first quadrupeds began arriving from sea to land, 380 million years ago, some had up to eight fingers, but the familiar pattern five was soon the standard, which has since been modified in some groups, such as frogs and birds.

Few people, except medical students have the opportunity to make a human dissection.

You can learn a lot from books and lectures, but only by dissecting the human body is truly understands how it works.

In a room specially prepared at the University of Glasgow, the anatomist Quentin Fogg deftly dissected a hand and a foot, apart layer by layer to reveal their innermost secrets.

The hand is one of the most complex and beautiful natural engineering in human body parts.

It gives us a powerful grip, but also allows us to manipulate small objects with great precision.

This versatility distinguishes us from all other creatures on the planet.

The hand has one of the strangest body muscle provisions.

His movements are largely controlled by muscles that are not on hand, but on the forearm.

Forearm muscles attach to the bones of the fingers for long tendons that pass through a flexible wrist.

This gives remote musculature fingers and force a move would not be possible if all the muscles had to be connected directly.

Indeed, bony hand is simply a puppet, bound by ligaments and controlled by the forearm.

But that provision allows us to do a lot. At one end is the impressive strength of the hands of a mountaineer.

Through the use and regular training, a single finger can withstand the weight of the entire body.

At the other end, a concert pianist needs great finesse, which comes a few muscles in the hand called “intrinsic”.

Some of these muscles specifically control the thumb and little finger, while others, such as lumbricales (named for its shape worms), and are not directly connected to the tendons and bones but to allow a wonderful subtlety of movement.

The hierarchy of the fingers

No one doubts that the thumb is the most important finger. It represents 40% of the capacity of hand and therefore, if one comes to lose one, the surgeons amputate without hesitation the big toe to replace it, sacrificing a body part for the greater good.

But what can one do without finger, if necessary?

I thought that little would be dispensable but, as I explained Donald Sammut hand surgeon is the most important, after the thumb.

Interestingly, the finger which can be dispensed with minimal downside is the index. You can include or exclude anything to do with your hands.

How do you know if something is smooth or rough, wet or dry, hot or cold?

The skin of the fingertips is very specialized. If the medium is sliced ​​egg, they closed fat cells, which act as protector for the huge amount of nerve endings underneath cushion are.

There are four main types of skin receptors and respond to light, deep pressure, touch, pain and temperature.

Nails also play a crucial role. If you did not have a rigid structure against which press would not be able to judge how firmly grab anything.

At first glance, the hand would seem a most interesting part of our anatomy feet, but the surgeon Kartik Hariharan proves me that the legs are equally complex.

Composed of 26 bones, 33 joints, 19 muscles and 57 ligaments, the foot is one of the few parts of the anatomy racing hand in complexity.

Our feet need to be strong enough to deal with some of the biggest forces experienced by the body, while being capable of such exquisite movements as a dancer pirouette.

In many ways, it is thanks to feet that have developed hands so extraordinary.

The ability to walk upright meant that early humans could cover large distances efficiently, but also left their hands free to develop their anatomy and unique capabilities.

Dissection revealed that foot skin is thick and resistant and under the heel pad is a specialized fat, packaged as bubble wrap to cushion and distribute the body’s weight.

At the core is the arch of the foot. Metacarpal create space for a strong network of muscles and ligaments with a vital role.

Absorb the forces created when you walk or run. But also it acts as the bow spring; storing and releasing energy when one pushes with fingers.

Today we run with cushioned shoes and maybe that’s why we tend to put the heels first.

So we risk damaging our joints, as the impact travels through the legs.

Barefoot runners make contact with the ball of the foot and the arch then dissipates the impact energy.

Walking exclusively on two legs is relatively rare in the animal kingdom.

Standing seems a simple act, but it is not. Many things happen that we stand.

Proprioception is the sense that tells us where in the space are the various parts of our body.

Even with closed eyes nose we can touch us with any finger. Sensory organs in our muscles and joints will communicate to the brain when and exactly where our limbs need be and how tense the muscles move.

It is this continuous feedback system between muscle and brain that detects tiny changes allowing us to maintain balance.

Our hands and feet are biomechanical wonders. More than any other part of the anatomy, they are those that have made us such a successful species.