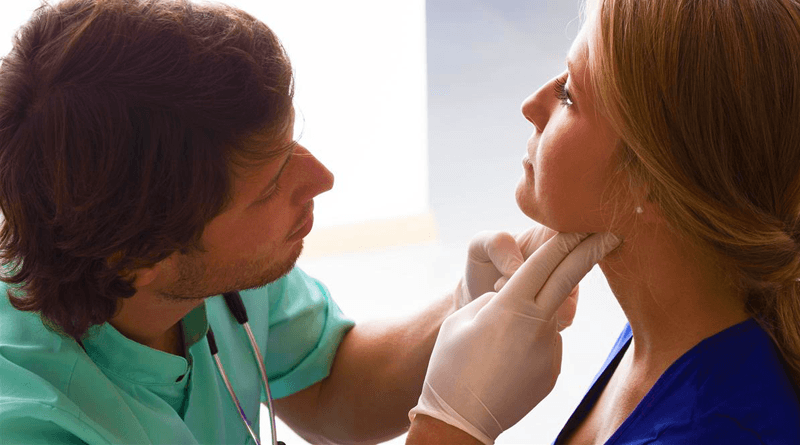 The thyroid is a butterfly-shaped gland that although it is not very large, has an impact on the whole organism. While both sexes can suffer it, it is more common in women.

A large percentage of the population suffers from thyroid problems (mostly women). This important gland in the metabolism may become unbalanced and suffer various diseases including thyroid cancer.

It is a gland that regulates many of our functions. It is responsible for producing hormones like thyroxin and triodothyronine involved in almost everything that happens within us. Thyroid changes affect the body in general.

Increasing activity is called hyperthyroidism. Common symptoms in this case are:

If you decrease your activity we are dealing with hypothyroidism.

What, how and why of thyroid cancer?

Thyroid cancer is not very common tumor that develops in the neck and, in most cases, a correct treatment has benign course. For this diagnosis must be early.

Women are more at risk for this disease once they have been through menopause or while in this period.

Symptoms that may be “warning” to the presence of thyroid cancer include:

What are the main causes of thyroid cancer?

Elevated levels of the hormone TSH in those with goiter

Inheritance (if someone in your family has suffered)

Having more than 40 years, women 70 years or more, in men

It is the most frequent (70% of cases) and often suffer women with a history of cervical irradiation. The tumor is well differentiated and may have calcifications.

In patients with advanced disease may metastasize to the cervical nodes. Nodule growth is slow and painless.

It is the second most commonly diagnosed and appears in people who have had or have goiter, especially over 50 years old. The tumor can grow to be the same size as normal thyroid and often difficult to detect.

It is spread through blood and metastasis targets the lungs and bones also via lymphatic system. The variable node is painless, hard consistency.

10% of people suffering from thyroid cancer are of this type. It is high grade and appears after 65 years in patients with previous problems such as goiter or papillary and follicular carcinomas also.

It’s like a shapeless mass that invades the gland. It can metastasize in lymph. It’s painful, grows fast and is hard consistency.

It has a different from other types of thyroid cancer origin. It is easy to detect through a histological study. It develops mainly in women at any age although there is an increased risk after 50 years.

It is a cancer that starts in cells called lymphocytes, which are part of the body’s immune system. Growth is very slow and is more common in older women who have had other illnesses related to the gland, such as Hashimoto’s Thyroiditis.

People experiencing some of the symptoms of this disease should make an appointment with an endocrinologist, who will perform certain tests or examinations to confirm or not the cancer. The most common studies are:

It allows to observe the complete neck area (including the thyroid) to search nodules or lumps. In the case of detecting them, you’ll also know if they are solid or filled with fluid. Similarly, the cysts are not synonymous with cancer: often are benign.

Puncture is performed with a needle to remove a lot of tissue and is then analyzed by a pathologist. You can use a scanner ultrasound to guide the needle and analgesic is provided so that the area is numb.

This test is performed once a nodule was detected.

Also known as CT or scanner, with this tests not only the neck but also the chest to look for signs of cancer elsewhere in the body, especially in the lungs is explored.

That is, it detects whether the cancer has spread to soft tissue.

Studies show that women who have given birth in the last five years are more likely to suffer from thyroid papillary cancer. This is because the gland produces more hormones during pregnancy and that can leave sequels in the future. Even more the risk increases if you have more pregnancies in that period.