Various Function of the Pharynx 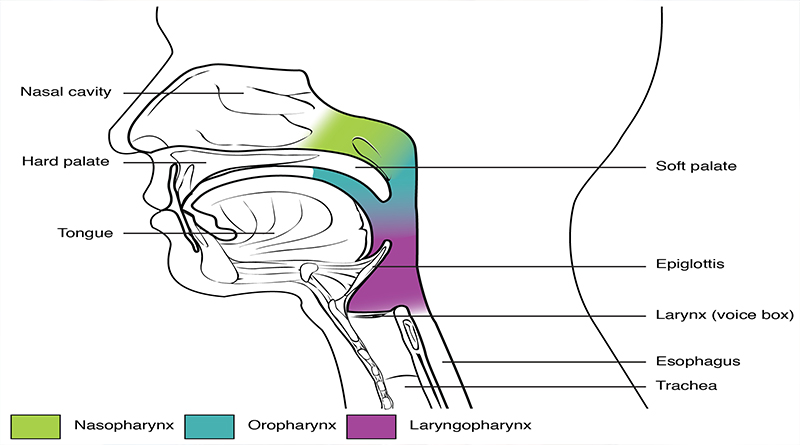 The pharynx is a conical cavity in the throat fibro muscular 5 inches long, is located behind the nasal and oral cavities posterior to the larynx. The pharynx can be divided into three regions, depending on the position.

Only the air passes from the nose through the nasopharynx, while the food, as air flows from the mouth to the oropharynx. The third section, which is the hypo pharynx, only allows the passage of air to the lungs.

Thick connective tissue and muscle fibers connect the pharynx with the base of the skull. Moreover, in the walls of the pharynx muscle there are two longitudinal and circular. The alternating contractions of these muscles do that food substances pass from the pharynx into the esophagus. The pharynx also houses the tonsils and adenoids. The pharynx plays an important role in our bodies. It plays a role both in the respiratory system, and the digestive system.

The function of the pharynx

The pharynx is a common conduit for air and food, so the pharynx has a dual function. The pharynx opens in two ways, one leading food passage into the esophagus and the trachea, which allows the passage of air.

It is in the pharynx, where it carried out the second phase of swallowing. Wet food substances moves to the back of the mouth and tongue are pushed into the pharynx. Here they are performed muscle contractions (circular muscle constrictions) and swallowing reflex is triggered. Part of swallowing is done as an act of reflection, while part of this action is under voluntary control. The food materials are pushed into the esophagus, which is a muscular tube that extends from the stomach. This avoids swallowing reflex, that food entering the trachea. In addition, the flap epiglottis covers the larynx, so that no food can enter the trachea. The longitudinal contraction of muscles in the walls of the pharynx rose walls of the pharynx during swallowing. When swallowing, food enters the food pipe only and not the trachea. However, if you talk while eating, sometimes, some food particles can get into the air tube and make us drown.

The function of the pharynx in the respiratory system

The air inhaled through the nose and mouth is taken to the pharynx, which is sent to the trachea. The air is then sent to the lungs. The mucus lining the walls of the oropharynx may change slightly to accommodate both foods such as air; therefore, the pharynx is also a part of the respiratory system. Any damage or injury caused to the pharynx can prevent breathing.

Other functions of the pharynx

The process by which human beings are capable of making vocal sounds and talk is called vocalization. When air passes through the pharynx and larynx then, it makes the vocal cords in the vibrating larynx, thus aiding in the production of sound, which is used for speech in humans.

Equalize the air pressure in the middle ear

The pharynx, with all major functions carried out, is a crucial part of the body. Coordinates breathing and swallowing while eating, with the help of a flap called the epiglottis. If this coordination does not work, suffocation occurs by the absence of breathing, which could be deadly. When the pharynx becomes infected, the symptoms of sore throat, such as pharyngitis, which is simply inflammation of the pharynx. It is not surprising that it is so difficult for us to swallow food with a sore throat!